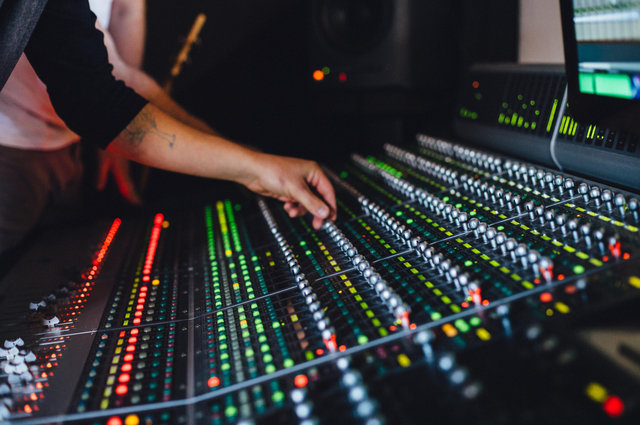 The Joy of Mixing Desks: Lighthouse Acoustics will help you to create a recording studio that is fit for the 21st century. Image by WaldMedia (via Shutterstock).

In Greater Manchester, there is one thing that defines our city region as much as football: popular music. Most notably groups like Oasis, Simply Red, Joy Division and New Order. Also the Hacienda night club and the Factory record label. In Stockport, it is the mighty Strawberry Studios, created by 10cc founder member Eric Stewart and Peter Tattersall. If you’re familiar with the recorded works of 10cc, the mixing and production values are tighter than Scrooge on the week before payday. Stewart’s and Tattersall’s expertise as studio designers came to the fore.

Though Strawberry Studios ceased to be a recording studio in 1993, it also busted the myth that groups had to travel to London to cut a disc. Smaller studios opened in Greater Manchester such as Cargo in Rochdale, Pennine in Saddleworth, and The Mill in Ashton-under-Lyne.

Whether you choose to have a ‘traditional’ studio with a mixing desk like Starship Enterprise or one with a beefy computer, there is one thing that remains the same. The need to keep out extraneous background noise from inside and outside. For studio designers, this means acoustic foam tiles and bass traps. They eliminate wow and flutter. Any background noise on your recordings make for sloppy, amateurish production values.

For your own studio, you could opt for the do-it-yourself approach: cheap, cheerful, but labour intensive, if you know what you’re doing. Better still, you could hire an acoustic consultants like Lighthouse Acoustics. Whether as part of a production company, broadcaster or home studio, we can work with studio designers to create a suitable environment for all recording projects. For example: control rooms, soundproof booths, and live rooms. Also post-production facilities.

Our experience as acoustic consultants is second to none in a variety of fields. Whether you’re casting aspersions on having the next Strawberry Studios or a home studio, we can be of service. For further information, why not give us a call on 0161 457 0515 or 07415 151901. Alternatively, you may prefer to email us via enquiry@lighthouseacoustics.co.uk. Either way, we shall get back to you as soon as possible.